Paul is a professional personal trainer specialising in strength conditioning and muscle hypertrophy techniques. His clients range from professional athletes and competitive bodybuilders to leading business men. As for himself, Paul has competed, and won, at several regional and national level natural bodybuilding events across the UK.

Why train with the Box Squat

Most people are well aware of the benefits of the normal standard squat but very few even know about the Box Squat. The box squat gets it name for the simple reason that a person basically squats down until they are sitting on a box (which can be anything from a pile of mats or some aerobics steps to a conventional powerlifting type box). Once the lifter is sat on the box they then flex off the box into the standing position. 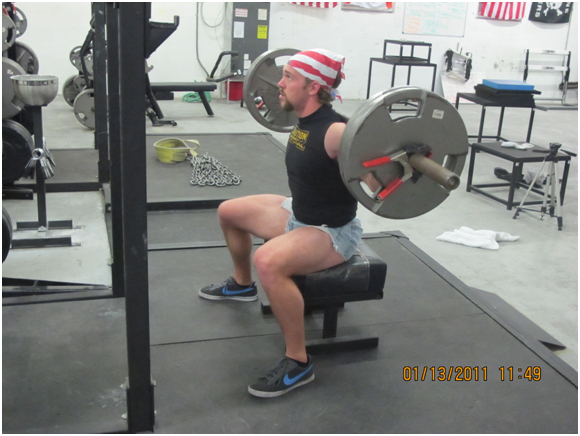 There are many advantages to the box squats such as :

Firstly fill your abdomen with air, and push out against your belt. Push your knees out as far as possible to the sides and with a tightly arched back, squat back, not down, until you completely sit on the box. Every muscle is kept tight while on the box with the exception of the hip flexors. By releasing and then contracting the hip flexors and arching the upper back, you will explode off the box, building tremendous starting strength. Remember to sit back and down, not straight down. Your hamstrings will be strengthened to a high degree, which is essential. Many don't know this, but the hamstrings are hip extensors. Remember to sit on the box completely and flex off.

Another advantage of the box squats is that you can change the height of the box you are squatting down onto, this means that you can target any weak areas. For example If your hips are weak, use a below parallel box with a wide stance. If you need low back power, use a close stance, below parallel. If your quads are weak, work on a parallel box. If you have a sticking point about 2 inches above parallel, as is common, then work on a box that is 2 inches above parallel.

To get some idea as to how effective box squats can be, the world famous WESTSIDE BARBELL CLUB (which is basically a gym for powerlifters) has over 20 lifters who have squatted over 700lbs!!.....They very rarely if ever do conventional squats except in competitions and generally perform box squats twice a week.

From my own experience I have noticed how performing box squats has greatly improved my Deadlift and especially my explosiveness from pulling the bar off the floor. It is also great for improving technique as it teaches the sitting back aspect of the squat which some people find hard to master at first. I have witnessed people?s conventional squatting technique improve dramatically after performing a few weeks of box squats.

So next time you are in the gym give the box squat a try for a change and start reaping the benefits of this exercise .At first it will feel completely different but before long it will feel as natural as conventional squatting. I would, however, advise that you start with a light weight at first as technique really is the key when you are first learning to box squat.

Your Feedback and Comments

Please join in the discussion. Ask a question, make a point, suggest a solution..