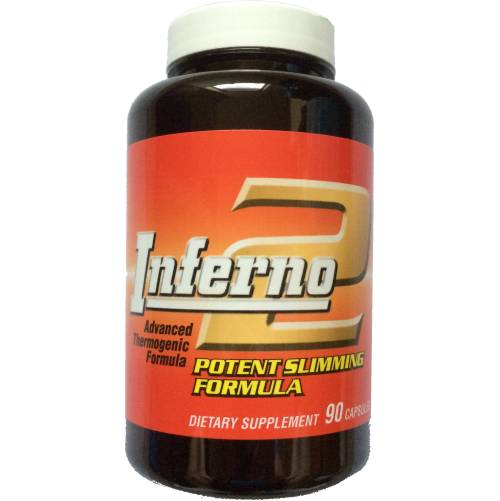 Inferno Fat Burners are a second generation thermogenic diet tablet designed for both women and men who are looking for a helping hand in their bid to lose body fat.

Regardless of whether you are a regular gym user looking to lose those last few pounds to reveal your abs, or you are at the start of a long haul diet to lose 10's of pounds to get down to your target body weight, then Inferno2 can help you reach your goal quicker and easier than you ever felt possible.

Infernos fat burning properties start with their ability to raise metabolic rate causing you to burn more calories even at rest. But beyond that they help blunt appetite so you don't crave food as you would when you normally diet. But best of all they make you feel energetic whilst supporting a feel good mentality that makes dieting almost fun!

The Inferno name has been at the forefront of the diet pill market for 15 years and we have been appointed as one of their preferred retailers and one of only a handful of UK distributors, which enables us to provide this fantastic fat loss aid direct to the public at unbeatable prices. Inferno2 combines a number of herbal and none-herbal ingredients which have the following properties:

This combination ofingredients have been carefully selected to not only help fat loss, but to help block the downsides of dieting that typically cause people to quit their diets and pile body fat back on. This is done through 3 major actions.

Firstly, the blend of themogenic ingredients in Inferno2 cause your body to burn more calories. This is achieved by stimulating your metabolism in what's termed 'a futile energy cycle' whereby your body uses stored calories (body fat) as a fuel to create body heat. Typically most effective fat burners will use this approach, however, where Inferno2 excels is that the effects last for up to 6 hours from a single serving rather than 1 or maybe 2 hours. This means that you continue to burn calories at a faster rate long after other diet pills have worm off.

The benefit of increased thermogenesis is that it causes fat loss almost exclusively from stored fat, rather than muscle tissue. This enables fitness enthusiasts to get rid of hard to lose stubborn body fat whilst keeping hold of lean body tissue giving that much sought after lean, ripped, magazine model look to their physique or figure.

Similarly, because it spares lean tissue, unlike normal diets where you lose both fat and muscle causing metabolic rate to drop, your diet continues to be effective long after regular dieting alone would have stopped giving further weight loss.

Secondly, Inferno's thermogenic properties actually stimulate the energy pathways of the body, so unlike a calorie controlled diet where you start feeling tired, weaker and lethargic, Inferno2 actually makes you feel more energetic than ever before.

By keeping energy levels higher you can not only continue to have a 'normal' life while dieting, but you'll also have energy for the gym making the process of losing fat all that much more rapid whilst still building muscle and developing shapely body tone.

Finally, because your energy levels are high your body does not signal your brain that its hungry. Anyone who's tried a long term diet will know that as you get hungry your body releases hormones in preparation for food. When you don't satisfy this need these hormones start to make you feel 'down' and its usually at this point that many people drop out of their diet. You eat, you feel good, you eat more, you get fatter! A familiar cycle yes?

Well Inferno2's ability to make you feel energised actually reduces your feelings of hunger. This in turn means that you don't get those mood swings, and the urge for binge eating and ruining your diet just doesn't happen.

So if its a fat burner to just get rid of those last 3 or 4 pounds of stubborn fat or if you need a diet supplement to help you stick with your diet to lose several pounds, then Inferno Thermogenic Fat Burner tablets are a great choice to help you make it happen.

How to Use Inferno 2 Fat Burners

Once you are familiar with, and have been using for a short time, Inferno can be taken in dosages of 1 capsule 2-3 times per daqy.

For people under 60kg, 2 capsules per day is sufficient.

Always take Inferno with an 8oz glass of water on an empty stomach. You should either exersice after taking or have a small meal within 30 minutes. Ideal times to take are before breakfast, lunch and evening meals.

Always split the dosage. Seperate dosages by at least 3 hours. AQvoid taking late in the day as this may affect sleep.